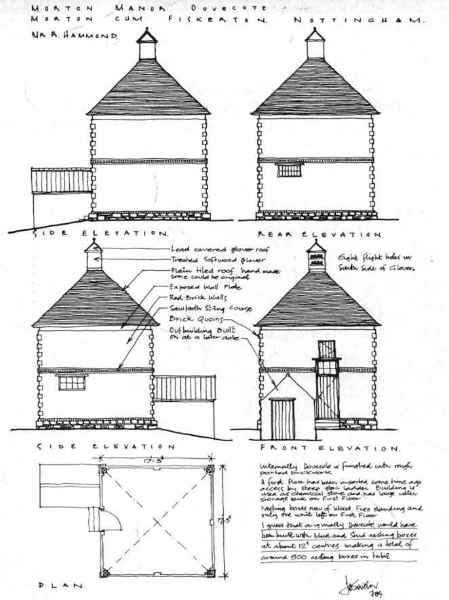 The Dovecote Fund was established in memory of Dr. Norman Summers, and commemorates his keen interest in the dovecote, a one-time common building form in Nottinghamshire.

The Trust was involved in the repair of dovecotes from the early 80’s. The first project was to repair the Dovecote at Bulwell, which was carried out in 1982. Cromwell Dovecote was the next, followed by Barton-in-Fabis. Details about these and a number of other dovecotes are recorded in articles in the Trust’s Bulletins as illustrated at Cromwell, Barton-in-Fabis and Morton.

The first dovecote repaired with the aid of the Dovecote Fund was that at Wollaton Hall, which was completed under the direction of John Severn in 1986 by the Family First Projects Agency. The work provided valuable training and experience for a team of people who had previously been unemployed for long periods.

The Trust acquired one threatened dovecote, that at Thoroton, which is illustrated in the photograph to the left.

The Nottingham architect and Trust member, the late John Severn, continued his interest in dovecotes, visiting, surveying and recording numerous dovecotes throughout the county. Just before his untimely death he was working on the establishment of a Dovecote Trail, where it would be possible for members of the public to visit and view a number of dovecotes. It would be fitting to think that one day this may some time come to fruition.

The Trust has completed a scheme of refurbishment for the dovecote at Thoroton, including rethatching and repointing.  Public access is possible by arrangement through the NBPT office and an interpretation board has been erected alongside the site.